As most of you know, I came to PNG knowing absolutely nothing about gardening, or even about taking care of plants. But when I got here, they put me in a house with a huge garden on the other side that belongs to Bill. Bill really enjoys gardening, knows a lot about it, and is good at it. His produce is shared among the missionaries, and others on the station. Previously, when he has left on furlough the garden has grown into bush, which would mean no more cabbage for me for 5 months - this isn't good. So I decided to attempt to keep it going, or at least to keep it from growing into bush. I know I may not be able to grow anything, but I can sure chop things down with the weedeater. (For those who don't know, weedeaters don't take down banana trees too well, despite trying real hard and using a lot of string and gas.)
Before Bill left, I got instructions on using the machinery - weedeater, lawn mower, rotatiller, and chainsaw (just kidding, he wouldn't teach me the chainsaw). I also asked a lot of questions and received a lot of instruction on care of the vegetables, how to plant them, whe 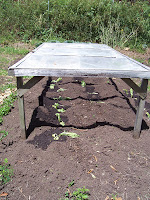 n to pick them, etc. I thought I was ready, but then the McCoys left for furlough and when I got out to the garden I found there was a lot I didn't know, and lots of unanswered questions.
Before they left, I asked Bill how to transplant the lettuce from a nursery box into the garden because I had planned on doing that. Instead that night, we went out and planted it. Great, one thing done, now I just need to keep watering it. However, when I went out to the garden on Saturday after they left, I found a screen thing on top of the lettuce. What is it? Why is it there? We didn't put it there on Thursday, but it was there on Saturday. Bill any help?
I decided I need 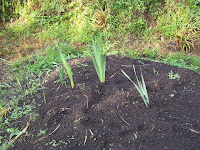 ed to use the handy weeder thing to get rid of some weeds around the cabbage, this is quite an easy job with this tool (Bill does it have a name?). After doing the cabbage, I figured I would do other areas of the garden too. I got to one patch and found these tall grass like plants growing. Initially, I thought it was a weed and was just chopping it down, but then I saw some onions and wondered if they could be beginning onions. I pulled one up and saw it had a long white root thing, sort of like an onion. So then I decided to leave them until I got confirmation one way or the o 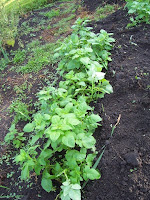 As I was walking around the garden I found some plants that are growing, but I don't know what they are. This really shouldn't be surprising since I don't really know what anything looks like except by looking at the fruit that it bears. So I have a few unknown plants that I keep tending to hoping one day to find some fruit of some sort that will allow me to identify them as something.

One of the thi

ngs that was suppose to be easy, was to pick the seeds of things that had died, so they can be used to start new plants when Bill gets back. I know I was suppose to pick the beans that are dead, but since I don't normally pick beans, how do I know what a dead bean looks like? So I picked something that I thought was dead, opened it up and I found what looks like an alive bean seed, very green and moist. I try again with something that looks even deader, this bean looks less alive that the other, but still moist and green. Then I find a 3rd bean plant, which has even deader looking bean pods, as I open this, I find a dried bean. So I have picked 3 different beans, but which one do you replant?

Thankfully, no one is depending on me to produce vegetables for them, so if I grow something it will be a bonus, and just getting outside has been fun. Stay tuned for more info as I try my hand in gardening.