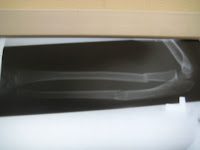 While on call, the ER calls that a kid has fallen and broken his arm.  The xray clearly shows a fracture of both bones in his left arm.  Despite the seemingly good straight position of the bones on xray one look at the kids arm told me it was no longer in that same position.

The boy was about 7 yo and was blind from birth.  He had fallen into a hole and put his arm out to catch himself and went down on a stone and in the process broke his arm.  His parents and another relative where doing all they could to keep this little guy under control, including holding him by his broken and now deformed L arm, but it was apparent he was a fighter and wasn't going to let me do anything to his arm without sedating him first.

Once he was asleep, I proceeded to put his arm in traction and to try and realign his bones.  One of the few challenges we have here is that we don't have the resources to do open reductions (surgery) on the majority of broken bones, so we try closed reduction.  Closed reduction is a fancy term for blindly trying to realign the bones by looking at the xray and trying to move the bones back where they need to go with brute force.  We also don't have a fluroscopy machine (which can take xrays as you are doing or right after the reduction to make sure you got the bones into position), so we rely on the method of reduction and re-xray in a day or 2 to see how the position is, redoing it when necessary. 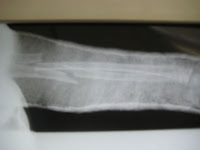 I have learned that my massive 120 lb frame doesn't have all the strength that is often required to reduce the fractures.  Despite failing, I try anyway and sometimes surprise myself with the results.  Most of the time, I get it close, but not quite and then usually ask Bill to give me a hand.  We usually give it 2 good tries at closed reduction before we refer the patient to Jim for possible surgical reduction of the fracture.

Since this was a little kid, I was thinking my chances of putting the bones back together were going to be pretty good.  I felt movement as I reduced it while on call, and then put him in a cast.  The next day his family brought him back to get the xray to see if his bones were straight again.  Unfortunately, the xray suggested that I made his fracture much worse.  So after sedating him again, Bill helped me reduce his arm, hopefully it will now be straight.
at 17:04