Returning to say thanks 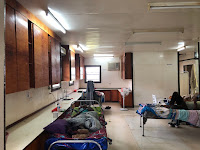 In Luke 17:11-19, there is a story about Jesus coming across 10 lepers who stood at a distance, and lifted up their voices and asked for Jesus to have mercy on them.  He asked them to go and show themselves to the priest, and as they did they were healed.  9 of them, upon realizing that they were healed, kept going, presumably to the priests for their declaration of being healed and able to return to their families, but 1 did not.  1 leper, when he realized he was healed, he turned around and went to Jesus, and thanked him and praised God for the healing.

I am not in medicine for thanks, nor do I think that every patient needs to or should say thanks.  I am a doctor, we are a hospital, it is our privilege and job to care for you, but there are times, when someone does say thanks that it really encourages and touches me.  Dealing with Covid has been hard for us here, as I am sure it has been for Hospitals and folks all around the world.  So many people have been afraid, so many people don't know what/who to believe.  The information coming from the government and National Department of Health changes, it seems, almost daily, causing us to adjust and change what we are doing.

So when a few patients and their families have struggled to be able to say thank you due to their overwhelming appreciation and gratitude for caring for them while they have had Covid, it has brought tears to my eyes as well.

One patient came to us after his wife was diagnosed with Covid and spent a few days with us, before she was able to go home.  A few days later, he showed up short of breath and spent some time in our Resp Isolation Ward.  When I talked to him on one of the first days, I was explaining that he wouldn't be with us the whole time, that when he got better he would be able to go home.  He was trying to explain why he wanted to stay, and I told him not to worry, that we wouldn't send him home until he was ready.  So when a few days later that time came, when he didn't need oxygen and was walking around without being short of breath and I told him he could go home, he just started crying.  He paused, as he held my hand and wanted to say more, but really couldn't.  He finally was able to say, thanks for saving my life and my wive's life.  Tears streamed down my cheeks as well, and I was touched by his words. 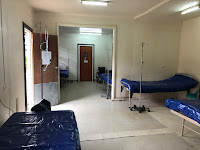 Another patient was someone who had all the risk factors for having a serious case of covid, obese, diabetic, hypertension, we were worried about him from the moment we admitted him.  This was someone we knew and loved, one of our staff, who has faithfully served our Hospital for years and has helped us be who we are today.  We were all pulling for him, praying for him, but all knew he might not make it.  So when he  walked out of the ward about 10 days later, he was so thankful, as was his family, for the care he got and for the life he has again.  His sister came and found me a few days later, and was crying, in gratitude, saying thanks for the care we gave him and for serving here.

I don't do this for the thanks, but sometimes it is nice to hear, and nice to know that what we are doing, what we are trying to do, the love and compassion we have for folks, is noticed and appreciated.