Life in the village is usually quite peaceful in the Highlands of PNG.  The women get up and go out to the gardens to dig some kaukau and harvest some vegetables to feed their families.  They head to the market with their produce to get some money to get cooking oil, matches, diapers for their kids at the little store in the village.  Men dig barrets (ditches) in the gardens, look for work, repair/build houses.  Children run around with little clothing on, playing with their toy cars made out of bamboo, or playing a jack like game with rocks, or soccer with a makeshift ball.  Laughter and talking are easily heard. 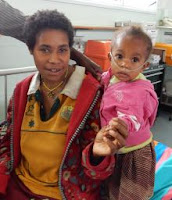 Most villages enjoy the peace when it comes, but everyone knows how quickly that can change.  One fight can change everything for everyone in the village.   One night a man got drunk and got into a fight, killing another man. The lain (family) of the first guy killed, wasn’t happy that this drunk guy killed their family member, so they sought retaliation.  The family of the drunk guy, had to fight back, to protect their family as well.  So now there are 2 large family groups fighting against each other, in a retaliatory eye for an eye like fight, which for over a year now continues. 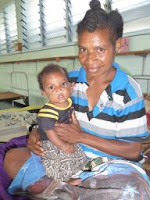 Fighting in PNG isn’t like the war movies that you see on TV.  It happens more in the bush (tree, wooded areas), in areas where you can hide, and try and not be seen by your enemy.  It can happen at night, when others are sleeping, keeping those involved in the fighting always on edge, with little sleep.  It can happen when you don’t expect it, like in the daytime as you go to the market to buy food for your family, but someone from the enemy lain, sees you and comes after you.  When you live close together, surviving in the midst of a fight is difficult.

Out of necessity, some lains, abandon their homes, and flee to safety, as fights break out.  In an effort of preserving their family, they run away from their homes, from their gardens and food sources, from the life they have known.  They become refugees on the run.  While the fighting might endanger the life of the men of the family, fleeing can endanger the life of everyone. 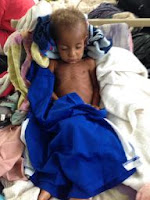 As they flee, they have to find ways to make new houses, leaving them exposed to the elements until they do.  Not having the time to make their typical “permanent” bush houses, they make quick ones, that don’t take as much time and can easily be abandoned if they need to run again.  Gardens are a bigger issue though.  Typically, PNGians live off of their gardens.  The gardens are their source of kaukau, beans, pineapple, etc.  It feeds the family, with some left over to sell at the market to get other essential items to live off of.  Without a home, without land, you have no garden.  So you scrounge for food, which can be a death sentence to the children and elderly among you. 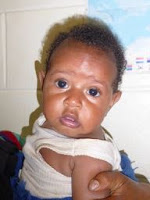 Just a few weeks ago, a mom brought her small child (little C.) to our hospital.  They had been living out in the bush, living far from a garden, making feeding the almost 2 year old, very difficult.  The girl began losing weight and eventually started developing swelling of her body from a lack of protein in her diet.  Finally, mom was able to bring her to the hospital, where we have slowly been refeeding her.  Her weight is going up, but she has a long way to go.  She doesn't really want to eat, so the tube going from her nose to her stomach, helps the life giving calories get inside  her starving body.  We treated her with antibiotics to fight off the infections that were threatening her life when she first came in, and now are working to maintain her weight, and keep her hemoglobin up as well.  I am thankful for the progress, but know there is a long way to go.

When I asked her mom where they would go when they left the hospital, the answer was back to the bush with her family.  Back to a place without a house, back to a place without food, without a garden, back to the place that almost killed her daughter.  I can't change their situation, but sure pray that it does change, so that this little girl's life won't continue to hang in the balance.   Would you pray with me for little C.
at 15:17